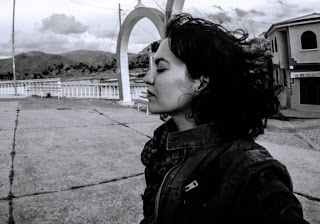 IN A PERPETUAL QUEST TO PIN DOWN HER IDENTITY, THE VISUAL ARTIST AYSE BALKÖSE DEMONSTRATES THAT THE COMPLEX AND DYNAMIC NATURE OF SELF IS AN ABUNDANT SOURCE OF INSPIRATION.

“My intention is capturing the physical sound waves and emotional impact of music and transforming it into the form of three-dimensional patterns.”

Hailing from Turkey, Ayse is based in Sheffield and started painting as a way of addressing questions surrounding her identity. As such, playing around with the definitions of identity is one of the key elements of her artistic practice.

As a self-taught multidisciplinary artist, Ayse’s work is an ever-changing attempt to understand herself in the context of the society we live in today. Her artistic repertoire consists of oil painting, live art performances (dance painting), photography, audio projects and visual installations.

Ayse’s strength lies very much in her versatility. She has been part of numerous successful collaborations, including A Journey of UnBelonging(2013-2014), a performance piece commissioned by ArtReach (Leicester) with the objective of creating more awareness of the un-settled journeys refugees and asylum seekers experience. This project saw Ayse perform a dance-painting to live Arabic music played by Mina Mikhael Salama, an Egyptian composer and musician whose own personal journey as a refugee was conveyed through music and interpreted on canvas by Ayşe, with the performance recorded by the Portuguese film-maker João Paulo Simões.

More recently Ayse was awarded a bursary as part of Arts on the Run's The Art of Migration, to create a new piece - The Voice (2016) which was exhibited at Migration Matters Festival Sheffield and Unity Works Wakefield during Refugee Week 2016. This resonant installation featured a spoken word audio narrative and twin video projections on distorted 3D surfaces sculpted by Ayse. Its imagery incorporated Ayse’s dance painting as an attempt to come to terms with the struggle immigrants and refugee artists face when finding their voice in a new host country.

Ayse is one of the most active members of the Arts on the Run community, however many of her projects are necessarily solitary pursuits. Towards the end of 2017 she completed an artist residency in Peru, where she produced the photography series Spaces Once Hold Memories as well as a set of experimental electronic soundscapes, both inspired by the Peruvian Amazon rainforest.

FOR AYSE, ART IS AN AVENUE FOR MAKING SENSE OF THE WORLD. IT IS HER CHOSEN LANGUAGE, AND ALLOWS HER TO EXPRESS HERSELF FREELY WITHOUT THE CONSTRAINTS OF CAREFULLY SELECTED WORDS CHERRY-PICKED TO SUIT A CERTAIN AUDIENCE. HER WORK TRANSCENDS THE CLICHÉD LABELS OF IMMIGRANT ARTISTS, AS SHE REMAINS UNDEFINEDBY HER MIGRATION, DEMONSTRATING THAT IT IS IN FACT HER, THROUGH THE MEDIUM OF SOLO AND JOINT PROJECTS, WHO CAN BEST DEFINE & SHAPE THE TERM, AND NOT THE OTHER WAY ROUND.

ARTS ON THE RUN PROVIDES A PLATFORM FOR AYSE ALLOWING HER TO SECURE COMMISSIONS AS WELL AS MEETING AND COLLABORATING WITH ARTISTS OF DIFFERENT BACKGROUND AND ART FORMS.