Development of Journey of UnBelonging

The piece is opening a journey of a refugee to the audience.  The piece premièred to an audience of 100 at the Curve theatre. Around 40% of the audience were refugees or asylum seekers and had never step foot in a theatre before. The atmosphere was "palpable" (Colleen Molloy, City of Sanctuary).
http://www.youtube.com/watch?v=aKQO3khCXRI&feature=youtu.be

I define a non-existing word and use it in the main title "UnBelonging" , not to belong and to be belonged.

By physically stepping onto paint and board to draw with my feet and movements, conceptually I am drawing the map of the lands which refugees have been physically and psychologically crossing over.

I would like to explain this multi dimensions one by one and as a result how do they work together as individual art forms collaborating and as individual artists expressing their perspective. 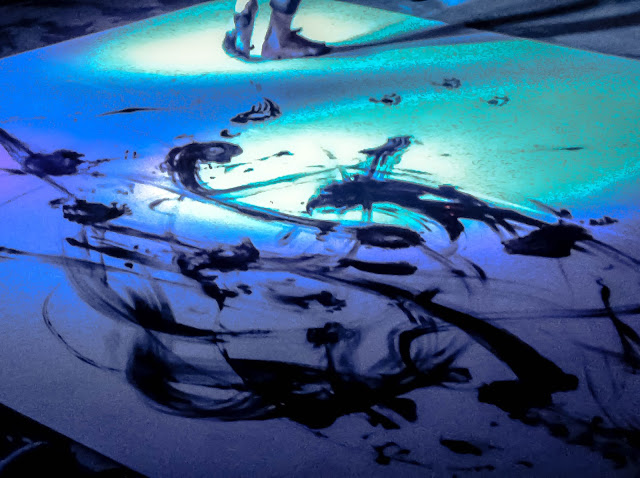 Although they are massively different, the instinctive nature of music, dance, painting and projecting through observing, the reality of the avoided is common in every culture.
There are hidden maps in the ancient songs which contains maps. Map that guide through social interactions, map that guide through the landscape...

"A Journey of Unbelonging" is a map which guides the audiences through the journey of refugees using honest, personal experiences. The Project explores three stages of "UnBelonging": "Exile, Acceptance and Empowerment".
How it feels to be on an exile, learning to accept where you are and be accepted for whom you are. This teaches to control persons own mind and teaches to seek new ways to communicate with the surrounding environment.

DANCE -PAINTING:
Intensity unites with elegant, round, square, sweaty, flowery moves. Feels like being a self powered machine. It is the same principle with using brush. Instead of a brush I use my feet.  Strokes and paint marks are created by dragging of the feet on the board in highly controlled movements . As the dancer I am simultaneously in a non-verbal dialogue with musicians and audience on a purpose of co-creation. Conscience mind meets with the sub-conscience
PAINTINGS:
Paintings are the abstract maps of the physical and mental journey taking. They include the interaction, perceptions, exchanges all happening in that moment of time.
They are large scales. I use 2 x 250cm boards. On this project, I work on black on white surface and white on black surface
MUSIC:
Composer and instrumentalist Mina Mikhail Salama is from Egypt. He is a refugee who has a "dead sentence".
The story line of the music is composed by Mina with gaps in between structures to allow free improvisation.  He used his wives and his baby daughter's voices (she was a baby when he left her in Alexandria). He plays 4 different instruments in this project: Ney flute, oud, and violin and kaval.
With his kaval, he draws the playground of my childhood, while soft cries of Ney is like relaxing on the waves of the ocean.
At live performances, a tabla player from Sheffield University (John Ball) accompanies Mina by creating musical patterns to back up for Mina's instruments. The tension in his oud feels embraces the dark and wet streets he slept and swept for days. This is unique. So unique that my limps becomes alive and take control of their own motions.
FILM:
The film maker Joao Paulo Simoe, Frontier Media; Angola, Portugal
He has a talent to capture the light and the dark side of the personalities. It always is easy for me to communicate with him. That is why I chose him to be part of this project.
It is a strange concept being the observer who is the reflector. Observing without your input whilst it is expected from you to put your own perspective in it is the fine line. Making it obvious which parts are objective observations offered to the audiences and inviting them to join the journey as an observer. Is it the film maker's observations or his experiences?