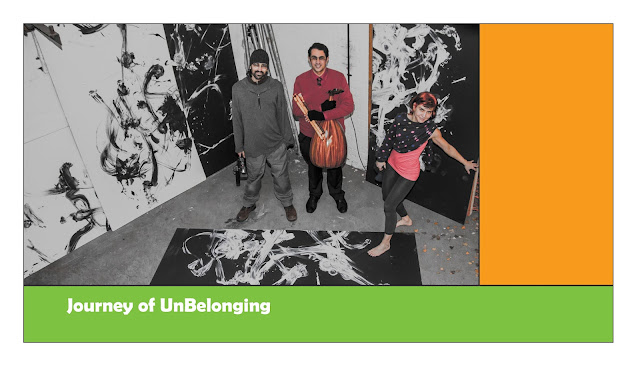 "A Journey of UnBelonging" is a series of paintings, one short film with music composition created during 3 development sessions in different ware houses in Sheffield by refugee and immigrant artists in the purpose of expressing their own journeys of "UnBelonging". The expression of the conceptual inner journey of not-belonging is reflected on a large board in the form of painting through movements of the performance artist (Ayse) based on tai chi, acrobatics and dance. Ayse action paints with her feet by her dramatic movements directly influenced by Mina Salama's live improvised music. The piece is exploring and reflecting the dramatic change of the inner perception of refugee's journey towards finding sanctuary. But is there ever a sanctuary?
The piece brings together three dimensions of artistic expression within the theme of cultural displacement - featuring Aysegul Balkose and Mina Mikhail Salama".
The project is produced by Aysegul Balkose and commissioned by Journeys Festival, ArtReach which is supported by Arts Council. The piece is opening a journey of a refugee to the audience.
The Project combines live dance painting, music composition and film making/video projection. Featuring three artists with whom of two are from refugee backgrounds. Development of the project was fun. After many discussions, story/experience sharing moments, story boarding sessions, personal investigations & three development sessions in different freezing cold warehouses in Sheffield & Doncaster  we have a powerful concept and body of works including paintings, short video, documentations and actually dates of performances.

More Blog Posts:
Driving Force Behind A Journey of UnBelonging
A Moral Refugee
Development Session
Practice Make it Perfect
Premier-Opening at the Cast Theatre
If My Homeland is Coloured, Poetry of Mauricia de Almeida Gomes
My intention is capturing the physical sound waves and emotional impact of music and transforming it into the form of three dimensional patterns. Every three dimensional pattern will have a two dimensional reflection. The shadow of the movement as a painting form
"UnBelonging" is a journey Mina, Joao and I have done and grow from it. We have something to say on the same concept in three different art forms
The piece premièred to an audience of 100 at the Curve theatre. Space was over capacity and we had to turn some audiences back. We are grateful and so happy to see such and response to this innovative work with in this delicate concept. Around 40% of the audience were refugees or asylum seekers and had never step foot in a theatre before. The atmosphere was “palpable” (Colleen Molloy, City of Sanctuary).
"Journeys Festival" was with us during arrangements of the premiere. Since then, It has been great to carry on working with our funders, ArtReach. 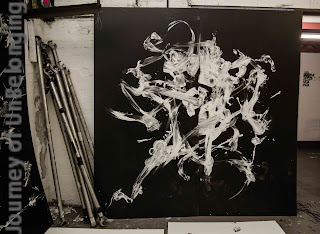 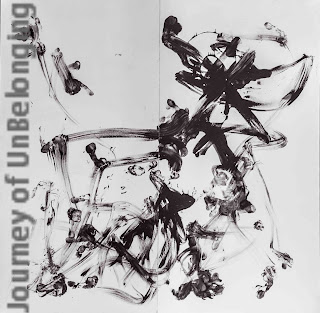 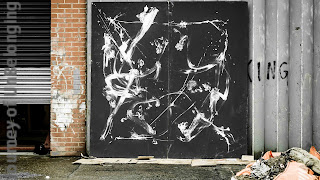